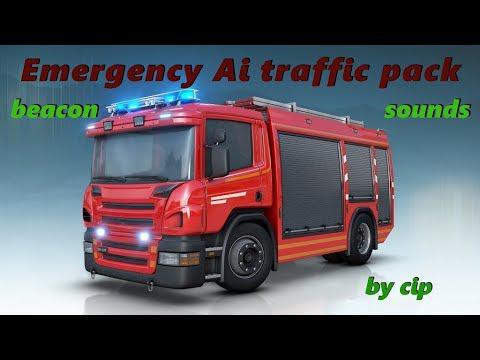 Description:
The pack includes only vehicles with beacon and sounds, and very few vehicles have only beacon (some of the “implants”). basically if you want to have more emergency vehicles only with beacon and no sounds spawning in parallel, you can use another emergency pack (mod do not conflict with any and I just did not want to duplicate existent packs)

How the pack works and possible issues:

-emergency vehicles drive faster with my traffic density mod, emergency having separate speed_class, however they obey to local signs for speed limits and to semaphore red lights. perhaps scs will make real emergency vehicles in the future of course other Ai ignore their visual and acoustic signal
-some Ai have same skins in different countries (following the same national language) sorry I don’t know yet how to make proper skins
-sounds of the vehicles is set to a distance of 100 m, if you want to edit this you can change it in the sound files from unit/hookup folder
-the sound have a fade in/out effect in 3of4 situations, when the emergency vehicle is stopped or slow driving and you are on the move, when you are stopped and Ai is on the move, when you and the Ai are driving in the same direction. the only situation where I have no fade in/out effect is when you meet emergency vehicles coming from the opposite direction, unfortunately I could not find the right sound numbers to get a fade in/out effect, good luck if you want to try!

– the emergency vehicles with sound can be seen and heard at road events. while at large road events these are really nice having also the sound fade in/out effect, however it may be considered not too realistic at small road events. I don;t know if there is any way to select them only for large road events, I will try to find out. meantime if you don’t want emergency vehicles at road events, you can remove the following files from unit/hookup folder: parked_vehicle.sii for police, and/or special_vehicles.sii for ambulances and firetrucks
-the ATS ambulance with no sound will spawn in all countries with low ratio, you can modify and add spawn_ratio: 0 if you want (modify the existent low ratio in def/vehicle/ford_f350_ambulance_mute.sii)

Authors:
cip
-Todor Alin for adding sound hookups and beacons to all models with no sounds and beacon by default, also for the Romanian skins and models
-Piva for some beacons imported from his mod (under his permission)
-SCS for ATS ambulance imported for few EU countries with no ambulance by default (Netherlands, Sweden, Denmark, Norway)
ETS2_Emergency_Ai_traffic_pack_1.36.scs – 214.8 MB modsbase.com/sharemods.com
Arriba
Responder
1 mensaje • Página 1 de 1